A few months after he was born, his father immigrated to the United States in pursuit of a better life for his family, leaving behind his wife and two older sons: Judge Rodríguez and his older brother, Jorge. At the age of two, Judge Rodriguez’s mother packed up her two boys and immigrated to Houston, Texas to join her husband.

The second oldest of six boys, Judge Rodríguez grew up playing sports like baseball and football. Not yet a U.S. citizen, he graduated from John H. Reagan High School. Shortly after graduating from high school, he and his older brother applied to become U.S. citizens. Judge Rodríguez’s driving force in this endeavor was that he wanted to be able to vote. In 1980, he voted in his first presidential election.

Judge Rodríguez went on to attend the University of Houston. Starting off as a Biology major, he switched his focus to pursue a business degree during his sophomore year. He was actively involved in several student organizations during his college years. Along with some of his classmates, he helped established the Mexican American Business Students Association, which is now known as the Hispanic Business Students Association.

In 1982, he graduated from the University of Houston with a Bachelor of Business Administration Degree in Marketing, thus becoming the first in his family to receive an undergraduate degree. His first job after graduation was with Xerox Corporation as a sales representative. Soon thereafter, he went to work for their competitor, Minolta. After six and ½ years of working in the business community as a sales representative, he decided to change courses in life and return to school to pursue a law degree.

In 1989, he was accepted to South Texas College of Law in Houston. After a few grueling months of preparation and anticipation, he took the bar exam in the summer of 1991. During his last semester of law school, he learned that he passed. He graduated from South Texas College of Law in 1991 with a Doctor of Jurisprudence Degree, once again becoming the first in his family to achieve such an accomplishment. On January 17, 1992, he was sworn in by Judge Lupe S. Salinas of the 351st Criminal District Court and officially became a licensed attorney.

Prior to taking the bench, Judge Rodríguez started his own law firm and practiced criminal law for 26 years. He tried cases ranging from speeding tickets to theft to assault to capital murder – and everything in between. In 2005, he was appointed to the position of Associate Judge for the City of Houston Municipal Courts by Mayor Bill White. For 13 years, he served as an Associate Judge for the City of Houston, presiding over Class C misdemeanors, while still maintaining a full-time law practice.

He currently resides in Houston, Texas with his wife, Patricia Limón de Rodríguez. 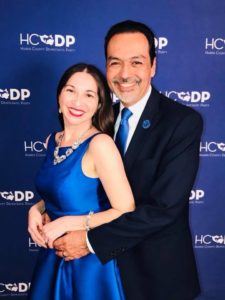